This short trip is ideal for those wanting to see the highlights of Tibet and Lhasa. You fly or drive across the Himalaya to Lhasa, where you have plenty of time to visit the main sights in and around the town including the Potala Palace, the Norbulingka (the Dalai Lama’s summer palace) and the Jorkhang Temple which contains Jowo Shakyamuni, the most holy statue to all Tibetan Buddhists.

You also visit the major monasteries in the Lhasa Valley including Samye, Drepung and Sera. You then drive along the Friendship Highway to Nepal, one of the most spectacular road journeys in the world. You visit the towns and monasteries in both Gyantse and Shigatse and then have a spectacular drive across the Tibetan Plateau with great views of Everest from the north side and Shishmapangma, the only 8,000m mountain totally in Tibet. Finally you drive through the Himalaya and down into a spectacular gorge back to Nepal and Kathmandu.

Potala Palace
The Potala, one of the most famous architectural works of our nations, is erected on top of the Red Hill in Lhasa. The word &ampampquotPotala” comes from Sanskrit. In the 7th century, after the Tibetan King Songtsen Gampo’s marriage with Princess Wencheng of the Tang Court, the Palace was built for meditation. In the mid-17th century, it was re-built by the 5th Dalai Lama to its present size, and ever since it became the Winter Palace of the Dalai Lamas. The construction took fifty years from its beginning to completion. The Potala is divided into two sections, namely, the Red Palace and White Palace. The total height of the Potala is 117 meters which is built in thirteen storeys, the length of the Palace from east to west has 400 meters and the breadth from south to north has 350 meters. The whole building is a structure of stone and timber. The top most flat glistens with golden roofs. It is a majestic architectural work and the cream Tibetan culture and complex of Tibetan and Han culture.

Sera Monastery
Sera means &ampampquothailstone” in Tibetan. Set at the foot of the Wudu Hill to the north of Lhasa City, Sera is comprised of a great sutra chanting hall, a college and 32 sections. Situated at three Km’s distance to the northern suburb of Lhasa. Jamchen Choje, a disple of Tsongkapa, founded sera Monastery in 1419, a disciple of Tsongkapa, the founder of Gelugpa Sect. The monastery is erected grandly at a mountain slope with a colourful architecture. Sera Monastery together with Ganden Monastery and Drepung Monastery in Lhasa are known as the Three Great Monasteries of Tibet.

Gyantse (13050 ft)
A small agricultural town famous for its wool carpets and the Phalkor Choide Chorten.Between the monastery and the fort, this unique structure built in 1414 consists of five stories representing the five steps to enlightenment, topped by thirteen rings which symbolize the stages of advancement towards Buddhahood. There are 108 halls inside, each with frescoes and Buddha Shrines, the frescoes showing a strong Indian influence. Before 1959 traders coming from Kalimpong and Gangtok (India) used to enter Tibet through Yandong and then to Gyantse, en route to Lhasa.

Shigatse (Xigatse) – 12600 ft.
&ampampquotShigatse” in Tibetan means ” the Estate that fulfills one’s Wishes&ampampquot. There is a bustling ‘free’ market at the foot of the ruins of the Xigatse Fortress where one can buy local handicrafts embedded with coral and turquoise, Tibetan daggers, Chinese porcelain and yak butter.

It is situated between 29o 02’N and 88o 08’E in the south – west of the Tibet Autonomous Region where Nyangchu River joins the Yarlung Tsangpo River. Shigatse is the second biggest town in Tibet and it is the center of transportation and the distributing center of agriculture and husbandry products of south eastern part of Tibet. It is famous for the great Monastery.

Zhangmu (7000 ft.)
Better known by it’s Tibetan name, Khasa. A small settlement clinging to a hillside 10Kms. from the Friendship Bridge across the Bhotekoshi river. Since the closure of the China/India border from Gangtok, Zhangmu has become the major trading point between Tibet and Nepal. The climate is quite different from the hinterland. The hills around Zhangmu are heavily wooded with many waterfalls in summer and impressive ice formations it winter. It has a bank, a post office, a government store, and is presently undergoing a construction boom to meet the demands of trade and tourism.

Nyalamu (12200 ft.)
Known as ‘Kuti’ to Nepalese traders, tucked into a fertile valley, Nyalamu used to be an important trade centre. Nowadays, barrack style Chinese communes surround the typical old flat roofed, mud-brick houses. Although vegetation is sparse, one can see an abundance of alpine fauna of the hillside during the summer months.

Xegar (13800 ft.)
A new Chinese commune built at the foot of the ruins of Xegar Dzong, 7 kms. from the main road. With a population of 3000, it is the centre of this large and remote area and a base from which expeditions to Mt. Everest and other peaks are launched.

Mt. Everest (Qomolangma)
Qomolangma Meaning ” Goddess” in Tibetan, is the highest mountain on earth with an altitude of 8848m. Mount Qomolangma, known to the western world as Mt. Everest, stands a the south of Tingri in the southern Tibet, on the border land of the central Himalayas, between China and Nepal, capped with accumulated eternal snow. The optimum weather on Mount Qomolangma is from April to June, an golden period for mountaineers. Each year a great number brave robust mountaineers come from all over the world to tour and climb Mount Qomolangma, hoping to fulfil a life-long wish by climbing and looking out the world’s highest peak.

Ruins of Guge Kingdom
Situated in Tsada country of Ngari Prefecture, Guge Kingdom was originally built in 10th century. According to historical records some sixteen hereditary kings had dorminated this Kingdom.

The extentive Guge kingdom ruins are found on a hillside about 300 meters in height. The ruins cover an area of 180000 squire meters, and ../includes more than 300 meters chapels, 300 caves, 3 stups each about 10 meters in height and five magnificent temples and palaces. In the temples many lively murals and clay sculptures can be still seen. 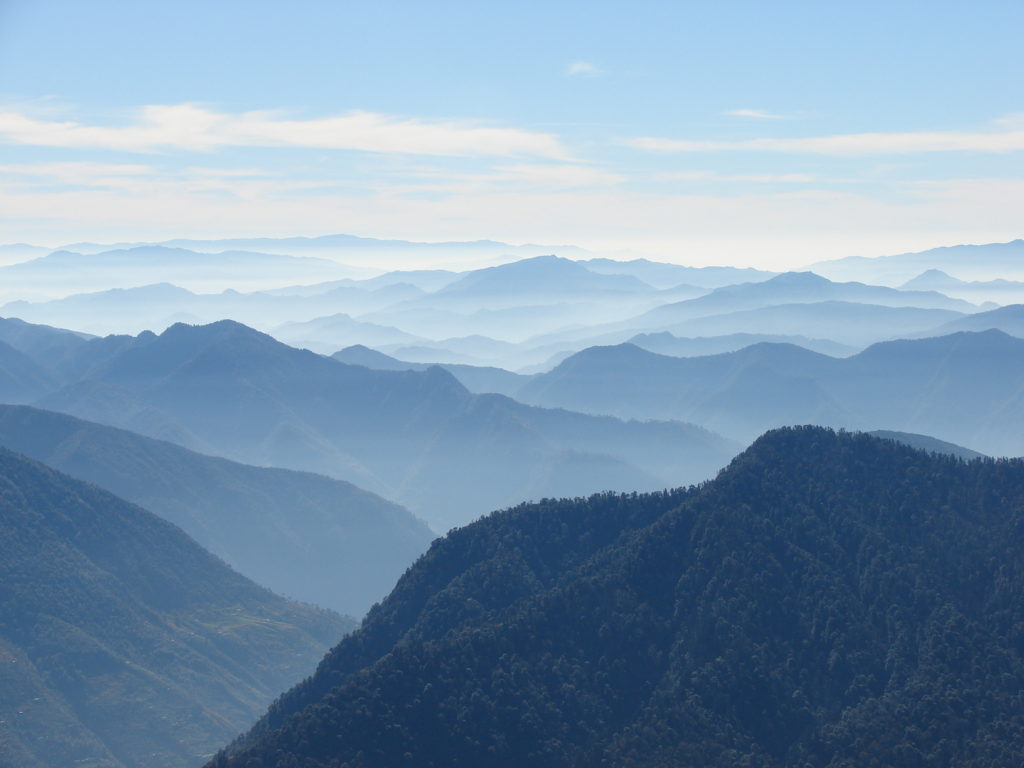